Fall and the Halloween season is the perfect time to hear about spooky ghost stories and the Smoky Mountains are home to more than a few haunting tales.

After all, dozens of grave sites and old homesteads dot the mountainous landscape of the Great Smoky Mountains National Park. These old hills have been the site of tragedies for hundreds of years, so it's no surprise that Gatlinburg seems to be home to a few frightful spirits.

Here are a few of our favorite Gatlinburg ghost stories to tell on your cabin vacation in the Smoky Mountains!

1. Lydia The Ghost of The Greenbrier 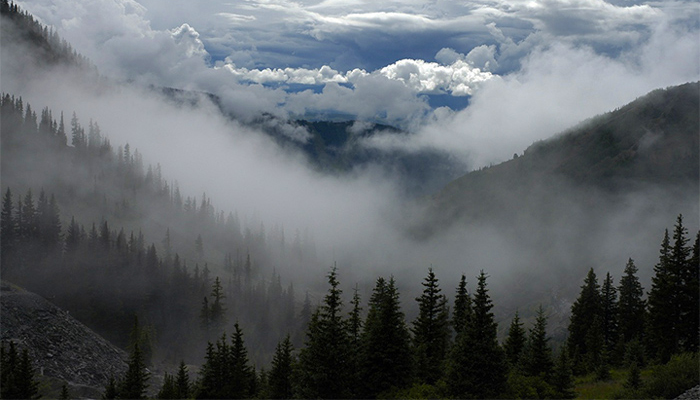 Back in the 1930s, the Greenbrier Lodge was the site of a terrible tragedy. According to local legend, a young woman named Lydia was engaged to marry a man from town. But on the day of her wedding, she was jilted at the altar. In sadness and desperation, Lydia threw a rope over the rafters and hung herself in her wedding dress.

In the days following her death, her former fiancé was found dead in the Smokies, the victim of a cougar attack. Because this large predator had disappeared from the region several decades earlier, locals speculated that Lydia's spirit had returned in the form of a ferocious mountain cat to take revenge on her unfaithful lover.

To this day, the staff at the Greenbrier Report seeing Lydia's lonesome apparition wandering the halls of the restaurant. One caretaker who lived at the lodge was woken by Lydia's mournful cry "mark my grave, mark my grave." According to the legend, the caretaker knew of the spot where Lydia was supposed to be buried, so under the light of the moon, he left the lodge to place a maker upon her grave. After that night, the caretaker was never woken by Lydia's cries again.

If you'd like to hear some stories about Lydia first hand, stop by the Greenbrier Restaurant in Gatlinburg for a delicious meal and tales of ghostly activity from the restaurant's resident spirit, Lydia.

2. The Abandoned Town of Elkmont

One thing to know about the Smoky Mountains is that prior to the formation of the national park, these mountains were home to thousands of people. To this day, you can see remnants of old cabins, logging camps, and graveyards that belonged to past residents of the area.

In fact, you can explore a true ghost town in the Elkmont area of the park. This area was once a logging camp and a resort community for wealthy vacationers who built homes in in neighborhoods with lofty names like "Millionaire's Row" and "Society Hill."

Some visitors to this section of the park report feeling a cold presence or uneasy feelings as they wander around the abandoned homes in this area of the park. After all, it's quite possible that this community has a few spectral residents that have never left.

3. Lucy on the Roaring Fork 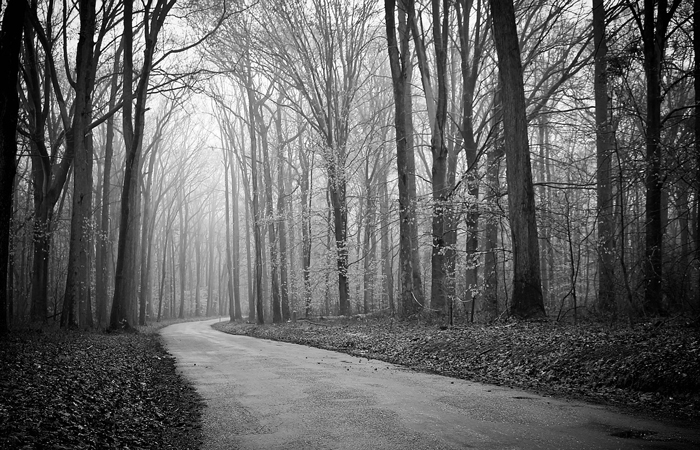 The Roaring Fork Motor Trail is a scenic loop road in the Great Smoky Mountains National Park just outside of Gatlinburg. Every year, thousands of motorists explore this verdant area of the national park that's home to rushing creeks and towering old growth forests.

But among the visitors exploring this beautiful part of the national park, locals say a ghost named Lucy is said to haunt this part of the Smokies. According to local lore, Lucy is a young woman who perished in a cabin fire sometime in the early 1900s.

Following her death, a man named Foster happened to be passing through the area one evening on horseback. He spotted a beautiful woman off to the side of the road walking barefoot on a cold night. Being a gentleman, he introduced himself to Lucy and offered her a ride. Enraptured by her mysterious beauty, Foster fell in love with her and returned to Lucy's parents home the next day to seek their approval for marriage. Unfortunately for Foster, Lucy's parents informed him that Lucy had tragically passed away in a fire several weeks before. 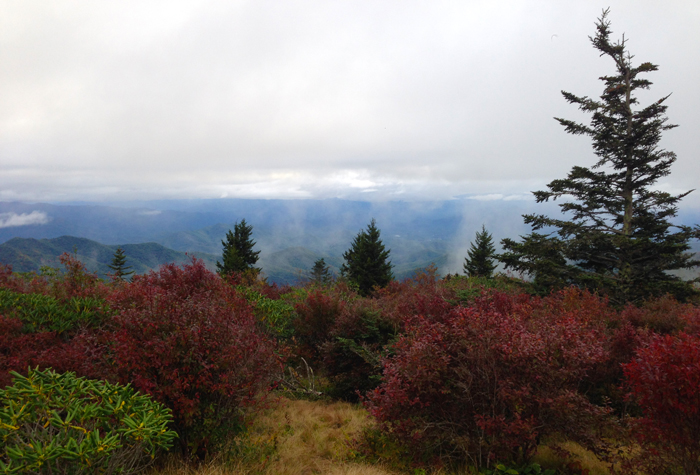 Long before Europeans settled in the Smoky Mountains, this part of the country was home to the Cherokee, who called this region Shakonohey, the land of the blue smoke. They used Gatlinburg and the surrounding area as a hunting ground and they told stories about this rugged, unforgiving landscape.

One monster said to lurk amongst the highest peaks in the Smokies was Spearfinger, a shape-shifting witch who had a long obsidian blade for her right forefinger. She could take the form of a swift fox, a powerful bear, or an innocuous bird, but her original form was that of an old woman.

An even more horrifying detail was that this creature's favorite treat was human livers. To catch her victims, Spearfinger would stalk her prey through the mountains or take the shape of a known person in the village to lure some poor soul to their demise.

It's not surprising that the Cherokee told of legends of shape-shifters that inhabited these remote mountains. If you're hiking in a remote section of the national park, it's not uncommon to become spooked by the sounds of leaves rustling in the forest by some unseen squirrel or bird. Other hikers talk about the eerie feeling of being watched as they trek through the woods. It's enough to make you wonder, was that sound a squirrel or was it Spearfinger on her way to get her next meal?

5. Mt. Sterling and A Haunting Tune 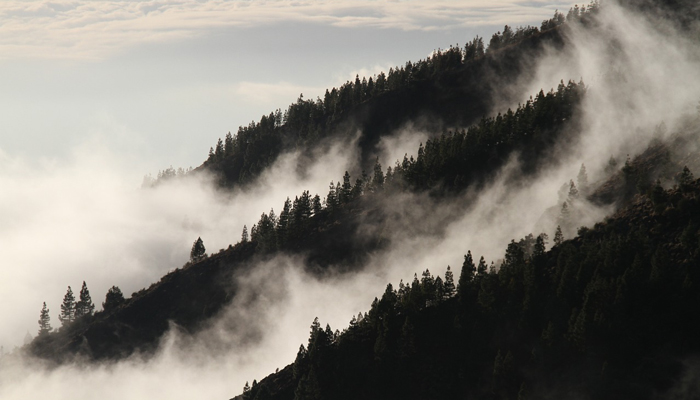 Mt. Sterling is a remote mountain located in the North Carolina side of the Great Smoky Mountains where hikers can enjoy beautiful views and stunning forest scenery. During the Civil War, this rugged part of the mountains served as a hideout for deserters from the Union and Confederate Armies.

According to local legend, Captain Albert Teague of the Confederate Army captured three deserters on Mt. Sterling: the Grooms Brothers and a man named Mitchell Caldwell. The deserters were marched over Mt. Sterling Gap to the Cataloochee Turnpike to be executed.

One of the brothers, Henry Grooms was known to be an excellent fiddle player and carried one everywhere he went. Before his execution, Teague's men ordered Henry to play one last tune. He fittingly chose to play "Bonaparte's Retreat," a haunting melody before being shot. In his last moments, Mitchell Caldwell was said to have grinned. Caldwell's eerie grin so unnerved the soldiers, that they covered his face with a hat before shooting him.

To this day, some hikers report seeing ghostly figures in the hills around Mt. Sterling and others swear they hear the mournful tune of a single fiddle playing deep within the forest.

Looking for more spooky fun in Gatlinburg? Check out a local Gatlinburg ghost tour. These fun tours take visitors through Downtown Gatlinburg and tell the story of Gatlinburg's ghostly residents. Additionally, haunted house attractions like Ripley's Haunted Adventure or The Mysterious Mansion are perfect places to have a screaming good time.

For your next vacation in the Smokies, perhaps you could take some time to explore the national park. In this 800 square mile wilderness that's littered with old homesteads and graveyards, you may begin to feel an eerie presence while you're deep in the woods. After all, the Smoky mountains are one of the last large sections of wilderness in the Eastern United States. In this wild and remote place that was once home to past residents, it's not surprising to get an unsettling feeling while you make your way through the forest.

Who knows, you may even stumble upon some kind of mysterious presence while hiking through the woods, so you can have a ghost story of your own to tell.

Are you feeling hungry? Try one of our picks for the top 5 sandwich shops in Gatlinburg on your next Smokies getaway!
gatlinburgdiningvacation tips

Experience nature's beauty to the fullest by visiting one of the top four parks in Gatlinburg, TN, for the perfect addition to your Smokies getaway.
activitiesfamily-friendlygatlinburggreat smoky mountains national parkhikingoutdoorsvacation tips