The Most Historic Places in Gatlinburg

Blog Home : Category Posts : The Most Historic Places in Gatlinburg

If you love history, then Gatlinburg and the Great Smoky Mountains National Park are an incredible place to explore!

Though Gatlinburg is now one of the most popular destinations in the country, it was once just a sleepy town nestled in the mountains of Tennessee. Though the area had many names, it was eventually named after Radford Gatlin, the owner of a general store and a confederate sympathizer. Oddly enough, the town still bears his name though Radford was ran out of town just before the Civil War.

The best way to explore the rich history of the Smoky Mountains is to visit historic places throughout Gatlinburg and the national park.

While there are dozens of places in the Smokies that are included on the national registry of historic places, we've put together a list of the 5 most historic sites in Gatlinburg, TN to explore on your next visit! 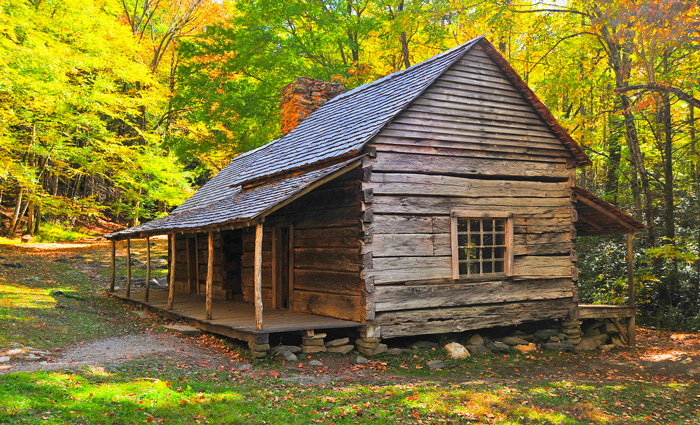 The Bud Noah Ogle Cabin is one of the most famous historic cabins in Gatlinburg. This cabin, barn, and other buildings on the Ogle homestead were built in 1880s.

Life in the mountains was hard and Gatlinburg's early residents had to be self-sufficient to survive. This cabin, complete with early plumbing and a tub mill, is a perfect example of the skill and ingenuity of the early settlers in the Smokies.

Surrounded by a beautiful forest, this preserved cabin is an excellent place to learn what life was like on a 19th century homestead in the mountains of Tennessee.

To see more historic sites, you can continue along the Roaring Fork Motor Trail to visit the Alex Cole Cabin and the Ephraim Bales place as well!

If you really want to explore the history of Gatlinburg, it's best to start at the beginning! Luckily, you can do exactly that with a visit to the oldest homestead in Gatlinburg: The Ogle Cabin.

Located adjacent to the Arrowmont School Galleries, this cabin was constructed in 1807.

Made of rough-hewn logs, the Ogle cabin is probably the oldest preserved cabin in all of Gatlinburg and the Great Smoky Mountains National Park. Martha Ogle and her family journeyed to Gatlinburg after her late husband had visited the area. In doing so, they became the first European settlers of White Oak Flatts, an area that would later become Gatlinburg.

This rustic cabin is open daily and it's easy to find – the Ogle Cabin is located directly across the street from Ripley's Aquarium of the Smokies.

The Old Sugarlands Community is another hot spot for historic attractions in Gatlinburg. You can start your visit to this area with a trip to the Sugarlands Visitor Center, where a ranger can provide you with maps and information for visiting the various highlights of the area.

A great cabin to visit in Sugarlands is the John Ownby Cabin. To reach it, take a short hike on the Fighting Creek Nature Trail that begins at the Visitors Center. The trail to the Ownby homestead is just over a mile and features beautiful forest scenery by a babbling mountain stream.

Built in 1860, the Ownby cabin is one of the oldest remaining homes inside the Great Smoky Mountains National Park.

To explore another part of the history of the Smoky Mountains, it's worthwhile to take a trip to Elkmont. This community was first a logging camp and then later a resort community for wealthy visitors to the Smokies.

As a result, this area is has several ruins of old logging camps and dozens of old resort homes from the 1920s, 30s, and 40s. Many are in a state of disrepair, but some are being preserved by the park service.

With names like "Millionaire's Row" and Society Hill, the neighborhoods in this community are markedly different than most other historic cabins in the Smokies. That being said, there are a couple homes like the Levi Trentham Cabin and the Avent Cabin that were built in the early 19th century.

Though millions of motorists drive the Newfound Gap Road every year, most visitors aren't aware that they are passing by the ruins of a Civil War era fort.

Built in 1862 by a band of Confederate Cherokee and European Settlers from Tennessee and North Carolina, Fort Harry's purpose was to control the Old Indian Gap Route through the mountains as well as to protect a mine at Alum Cave on Mt. LeConte. Saltpeter and other chemicals gathered from Alum Cave Bluffs were necessary for manufacturing gunpowder.

Though nothing remains of the fort, it's clear why the confederates chose this location. The original site sits half a mile north of the first tunnel after the Chimney Tops parking area on a bluff above the road. The rugged landscape created a natural bottleneck that was perfect for defending the route to Alum Cave and several Confederate communities in Western North Carolina.

Fort Harry, constructed entirely of logs, was about 100 ft. in length and width with 8 guard towers. Approximately 300 soldiers manned the fort and defended attacks from Unionist guerrillas in Tennessee.

Unfortunately, at an elevation of 3,300 feet, the climate was harsh and many at the fort succumbed to disease and exposure. In fact, there's a burial ground for soldiers near the Road Prong trail for the popular Chimney Tops hike. This area marked by a 3 x 4 ft. arrowhead and is the final resting place for 34 soldiers and around 100 Cherokee civilians.

The fort was burned to the ground by federal forces in 1864 as the war was winding down. No major civil war battles took place in Gatlinburg, but the Smoky Mountains were the site of several skirmishes and guerrilla warfare between Confederate and Unionist sympathizers.

White Oak Flats Cemetery is another great place to learn about the history of Gatlinburg's early residents. First established in 1830, the cemetery is the final resting place of many pioneering residents such as the Ogles, Huskeys, and Reagans.

Cades Cove is another incredible place to explore the history of the Smoky Mountains. Some must see places in Cades Cove are the John Oliver Cabin and the John Cable Mill, a preserved tub mill powered by a waterwheel. To explore these sights, simply take a drive on the 11-mile Cades Cove Loop Road located in the Southwestern corner of the national park.

To learn more about Gatlinburg's history, take a trip to the Gatlinburg History Museum or stop by the Sugarlands Visitor Center to learn about what life was like in the mountains.

We'd love to know, what are your favorite historic places in Gatlinburg and the Smoky Mountains? Please share your thoughts in our comment section!

What to Pack When Going to the Smoky Mountains

Prepare yourself for the best Smokies vacation possible with your favorite people by knowing what to pack when going to the mountains!
gatlinburgsmoky mountain vacationtravel tipsvacation tips

With only 48 hours in Gatlinburg, you'll need to optimize your time to keep the fun going. Check out our best short vacation ideas for Gatlinburg to get started!
gatlinburgactivitiesshoppingvacation ideas

Exploring the Best Places to Fish in the Smokies

Make your next Smokies getaway relaxing by trying out one of the best places to fish in the Smokies and slow things down.
activitiesfamily friendlygatlinburggreat smoky mountains national parkoutdoorvacation ideas